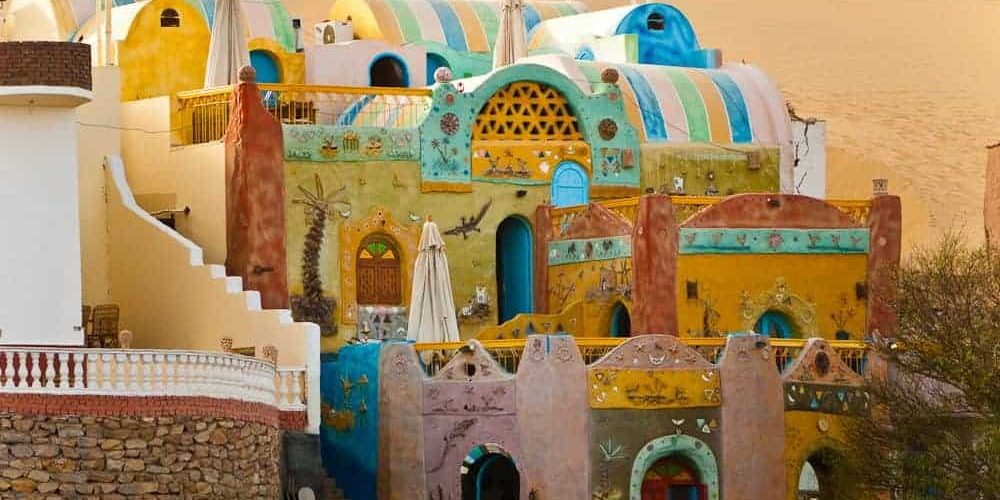 We will discover the entire thing about Nubian people in Egypt and their culture in details through this blog post from the Tomytour blog.

Nubia is how to walk through it with a land with a history dating back to 5000 BCE to live with such a remarkable diversity of cultures of mixed known commonly as “Nubian folks,” which are the Kenzi who talk the Matouki language, this same Fadija who talk their own language, as well as the tribal groups of Aliqat who shifted to Nubia from Sinai in the eighteenth century, that also reunified in Nubian Society with a made different of ancient Egyptian perceptions.

Nubian people in Egypt and their culture

The Nubians were the first people to live in modern southern Egypt and northern Sudan. Traditionally, such lands were recognized as Nubia. Unbeknownst to many, they were home to one of humanity’s most significant ancient civilizations. Indeed, the Nubians governed ancient Egypt for nearly 100 years! The Nubian region was known to Egyptians as “Ta-Seti,” which implies “The Land of the Bow,” an allusion to Nubian archery abilities. Notwithstanding their closeness to Egypt, the Nubians would have their own unique culture; nevertheless, during the fresh kingdom era (1550 BC), Nubians, as well as Egyptians, had become so strongly related that certain scholars take into account them practically indistinguishable, even as two different cultures blended around each other.

The Nubians have their own chance to celebrate the Muslim festival of Ashoura, which bears some resemblance to Islam and therefore is evocative of ancient myths from ancient history. Osiris and Al-Hussein have an innate and symbiont correlation that is a part of the culture. It also signifies theirs based on cultural distinction. Al-Hussein is directly correlated with Osiris in the Nubian mind. As a matter of fact, Hussein’s martyrdom is reminiscent of Osiris’ assassination. He discloses aspects of Nubian society and gets the attention of his hearers to the minutiae and parochial subtleties of Nubia’s history and culture.

The crucifix is still a great symbol of Nubian cultural identities. It is commonly seen as a motif to embellish structures. Nubia was a Christian territory for much more than a thousand years before these residents embraced Muslims as their own religion.

Nubia is ruled by Egypt

During the Egyptian Middle Kingdom period (2040-1640 BC), the Egyptian Kingdom continued to spread into Nubia. They took control of essential routes and built forts along the Nile. There has been little conversation between the two civilizations there at the time. Still, it was thought to be reasonably calm.

Under Egyptian rule, the Nubians were also fierce soldiers, particularly in target shooting. They have been known as the Medjay, which was initially a region of land inhabited by Nubians and yet eventually came to pertain to a secret paramilitary organization in the Egyptian army.

After years of Egyptian rule, the Nubians, recognized as Kushites just at the time, ruled Egypt during this time frame. The Nubian ancient Egyptians and leaders were mainly integrated into Egyptian culture. Whereas the Nubians decided to bring a few of their society with them to Egypt, they mostly kept the same governmental rules, artistic style, monuments, and religious traditions. The Nubians also resurrected the pyramid-building heritage around this time. The Nubians ruled The empire (or parts of Egypt) for over a century before even being pushed out by the Assyrians. Even though both cultures conquered one another, history proves that the Egyptian-Nubian connection was quite serene.

They have several cultures, dance moves, and a unique set of customs within their society, mainly when a wedding occurs and a baby “Sebou” is conceived. Today, most Nubian hamlets in Egypt are close to Aswan and Elephantine Island. Since of their encompassing essence, they all stay married in the same neighborhood. Such villages are different exposure to bright, bold colors of the residences. One’s villages are unlike everything in Egypt. They are split into 3 tribal groups: Al-Fadiga, Arab Al-Orayqat (Initially Bedouin Traders Who Migrated from Hijaz), and Al-Konoz, also called al (A Mix of Arab Tribes, the Biggest Being Al-Gohayna Tribe, from the Arabian Peninsula).

The Nubians were brought back to their motherland after already being overpowered by the Assyrians and have stayed mainly in the same neighborhood all through time, where they can be found recently. Contemporary Nubians now practice Islam as their faith due to the upsurge of Arabs into Egypt and Sudan (though, as mentioned previously, they did convert to Christianity in the Medieval period). Nubia, as now recognized, is divided between Sudan and Egypt. This happened near the end of the empire era, once contemporary Egypt was home to around a quarter of Nubian inhabitants. Regrettably, for the Nubians, duration has not been on their side.

The Nile crocodile as well as its significance for Nubians

Nubian fishermen will hunt crocodiles and stuff them into the straw, trying to hang them over one’s doors as talismans to ward off the evil eye. The crocodile’s mouth was left open. However, its body is covered in vibrantly colored beads. The olom, as the Nile crocodile is recognized in the Nubian dialect, was more than a lucky charm for the ancient Egyptians. During the reign of the Pharaohs, he was worshipped as the god Sobek, whose honor the monastery of Komombo was built in Upper Egypt.

Presently, the central part of Nubian villages in Egypt can be spotted near Aswan and Elephantine Island. Such villages are distinguished from those other Egyptian villages by their residences’ brilliant, bright colors. Although the Nubians who reside here are Egyptian residents, they preserve theirs possess culture.

We discovered everything about Nubian people in Egypt in detail through the previous points and we hope you like it too much buddy!

Once you try to visit Nubian people in Egypt, don’t hesitate to reach out with Tomytour